Camping is a very exciting activity for friends and families. It is the perfect time for them to slow down, relax, and spend some time together.

My favorite part of the camping activity is the evening campfire near the beloved best tent brand.

However, unless you have a lot of things to talk about or there’s a family musician who would play an instrument, then the adults may get bored just looking at the fire for hours on end.

Do not trouble yourself too much though for there are entertaining campfire games that you can share with your folks. This post will share fifteen of them. So ride along and see just how fun your camping activity would be with these games. 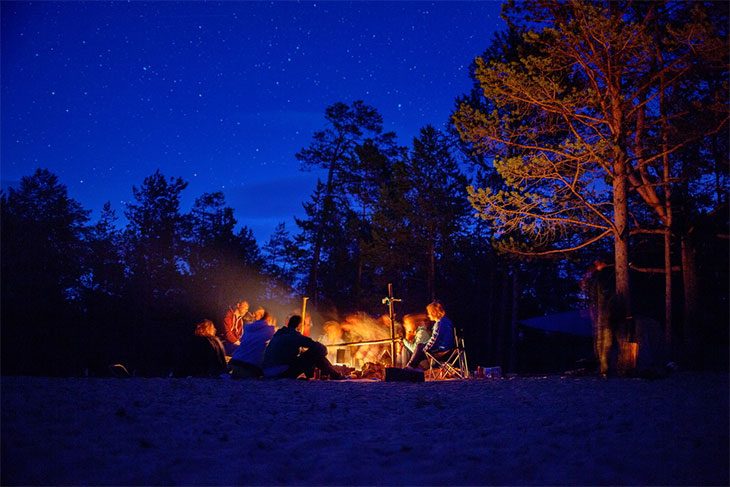 Is a popular campfire game for adults. Historical figures, superheroes, or celebrities make an amazing theme for this activity! After you have decided on a theme, have every player jot down the name of an individual who’s in that category.​

There are numerous variations on the way this game is played. Just learn the detailed instructions on Who Am I.​

A player starts the game by stating a celebrity’s full name and the following player has 30 seconds to name another celeb with the initial letter of the last name of the mentioned celebrity. For example, the first player states “Demi Lovato” and the second player says “Leonardo DiCaprio”.

The third player may say “Denzel Washington”. The game continues for three rounds.​ 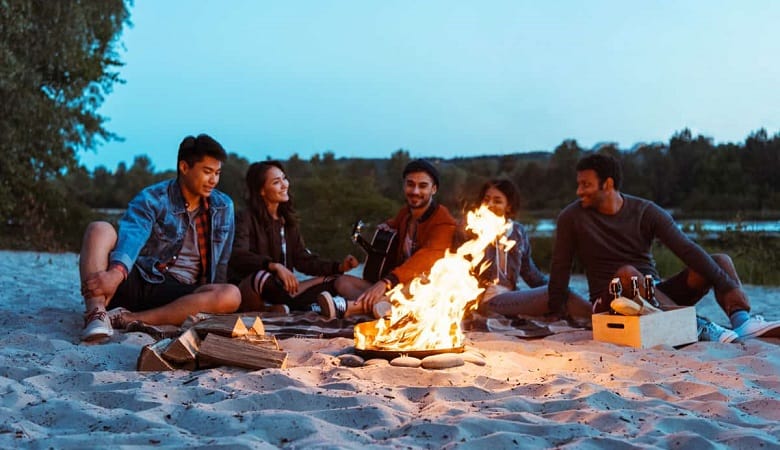 Twenty Questions is another standard game that the majority of campers have played at some point. By tradition, one player (deemed as the “answerer”) chooses an object (or a popular individual) and doesn’t share who or what is to the other players.​

The other players are considered the “question askers or guessers”. The guessers should take turns throwing questions answerable by yes or no. If one of them determines what the answerer is referring to, they’ll become the answerer the following round.​

And if 20 questions pass but no players have determined what the person or object is, the answerer can select another object or person in the following round because they’ve stumped the other players. And the number one rule is that lying is not allowed.

This game does not need a stick! You can utilize a pencil, a bat, a fork, or any other object available at the campfire.

There is one folk who’s in the know; he or she always begins with clearing his or her throat and stating “I can tap this stick just right,” and the item is passed to the next player to tap.

Five Daily Facts appears easy at first, but it can get more difficult based on how bored or excited the players are.

The players begin by listing five day-to-day facts (Such as “I got a new car today”, or “Today, I swam”), they can be normal or silly like wondering how long do mres last – it does not matter.

After everybody has stated their facts, the first player would say another fact than the five they’d already listed. The objective is to see the number of facts about every player can be recalled as one goes down the line.

Is an old, classic game played by everybody in their cosy best inflatable loungers. One player inquires another player the classic “Truth or Dare?” question. The player asked decides whether they’d like to answer a “truth” query or perform a dare.​

And if the asked player doesn’t complete the truth or dare, then they pay some type of penalty – maybe putting a dollar in a jar, taking another drink, and all that.

There are numerous variations of this activity to make it as entertaining as the players would like.

There was once a skunk is a story activity that can get rather silly! The first player starts the story with the phrase, “There once was a skunk who…” and ends it however they want.​

And as soon as they finish their sentence, then they pick an individual who begins their sentence with “Fortunately…” — alternating it while the players continue the story.

Playing telephone is a familiar game that constantly garners good laughs! An individual whispers a phrase or statement to the folk on their right.

And that individual whispers such phrase to the person on the right, and this sequence continues around the circle or down the line.

The last individual to hear the statement says it out loud – regardless of how crazy it may sound! It is funny how much the statement changes from one person to another person.​

9. The Winking Assassin Or Murderer​ 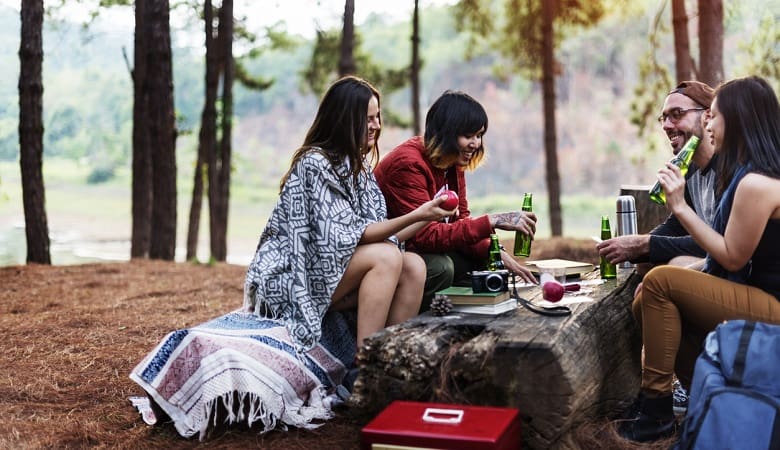 This game is an especially fun game – particularly for individuals who make use of their entire faces to wink! A neutral moderator covertly chooses an assassin. Once they’re selected, everybody mingles around a tent or your best truck camper while ensuring to look in the other players’ eyes.​

The assassin’s objective is to wink at everyone to murder them off with no detection. As the rest are winked at, they should re-enact an upsetting death where they are in and out for the entire period.

And if a living player believes they know who the murderer is, they can point him out and make the accusation! But if they mistakenly accuse, they’re dead for the rest of the round. The game goes on until only one player or the killer remains.

Name that tune has variations; however, having every individual “sing” their song can be more fun. One person plays or sings their song and the rest guesses according to what they have heard. 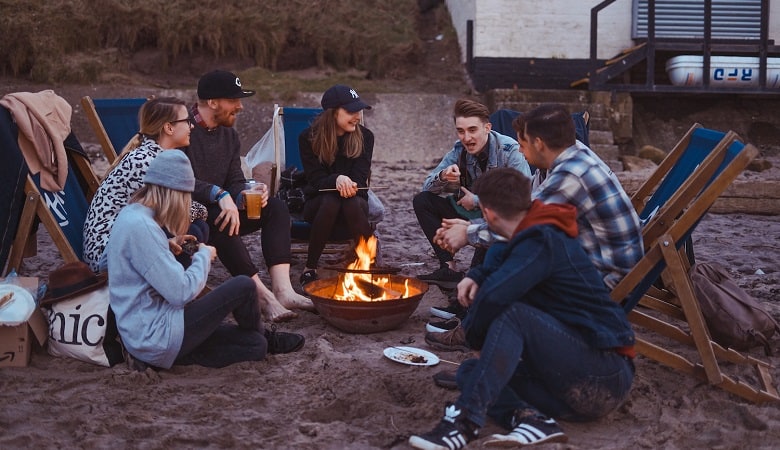 Make me laugh is a classic stare down game! It can be a complicated game to play because it become more unpredictable as the game goes on.

Players confront each other, and the first one to laugh loses. See how long it would take for the most serious individuals to hold on before they start to crack!

Mafia and Werewolf is a common party game or activity that can be played easily around the campfire even wearing best ems boots or keen vs.merrell shoes. This game is played by 6 to 16 players, so it is good for large and small groups. The only thing you need to bring is a deck of cards.

One person will serve as the neutral moderator, but everybody else will be divided into two groups: The Mafia or The Honest. Learn the entire rules of the mafia game here.​ 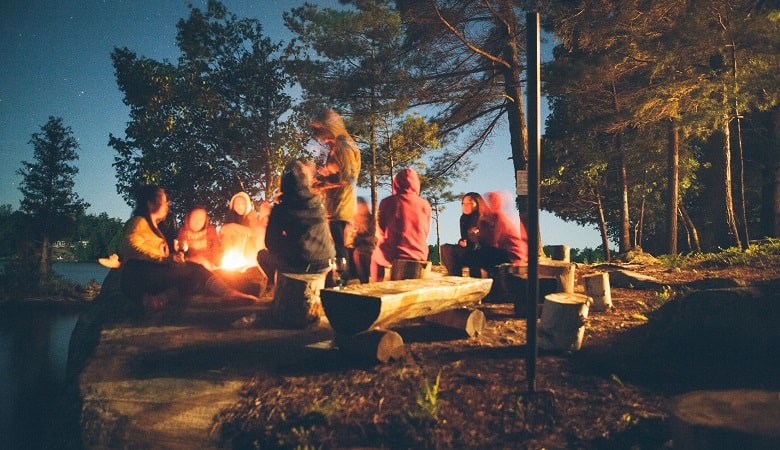 Two truths and a lie is often an icebreaker game, but it is also amusing to play whenever you want to learn more about your friends in the game! Every person declares three statements – one lie and two truths. Everybody else guesses the incorrect statement.​

The playing goes on until everybody catches on about the clearing of the throat being part of the process.

Check out this fun video of Will Smith playing Two Truths and a Lie:​

Who doesn’t love playing games and holding amusing activities around the campfire? Aside from being fun, these campfire games do not need preparation, lighting, best rain gear for fishing, or anything fancy.

Also, campfire games are an amazing way to get to know each other better and create great memories. We hope you enjoyed this post along with other camping tips. We suggest you to also go through our best headliner adhesive,  best rv washer dryer combo, and 10w-30 vs 5w-34 oils reviews

Do you know of any other campfire games that you can add?