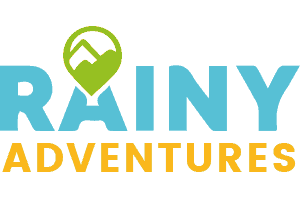 Solo camping has its own set of fears and expectations, and the slightest bit of trepidation.

Women camping could endure more issues than men when it comes to safety and accessibility, so let’s talk about it, and give a brief guide on the right way to prepare for anything that might come your way.

There’s a lot of stigmas against women doing anything outdoorsey: camping, hiking, fishing, you name is.

That’s a load of rubbish, and we’re here to clear the air about a lot of misconceptions surrounding women during solo camping, and the outdoors in general.

Women Can’t Carry as Much as a Man 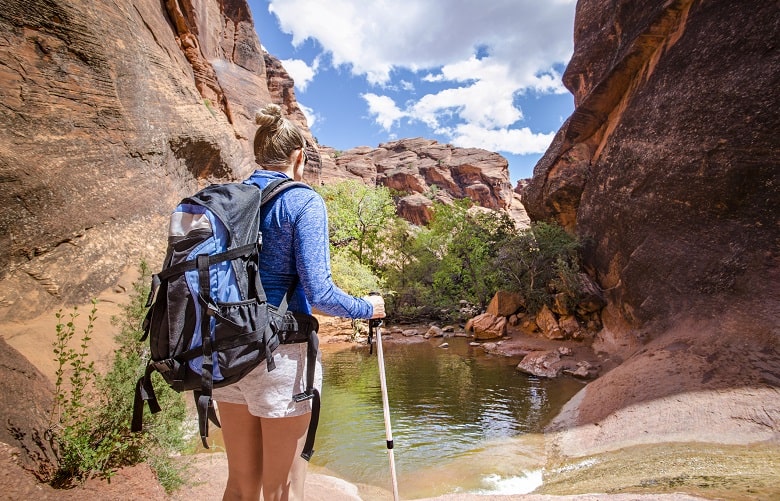 Men and women are built differently, but that doesn’t define abilities or leave a great divide in between them.

Women generally have a harder time building muscle in their shoulders and chest, but that doesn’t mean they can’t perform the same.

The size of your body and the capability of your strength are two different things entirely. A 120 lb woman can potentially carry twice as much as a 240 lb man.

Pack smart, distribute the weight in your pack evenly, and try to carry 30% of your body weight for optimal results, but understand that you can carry more should the need arise.

This is just total poppycock.

In truth, men and women can both suffer from inefficiency when camping in groups.

There’s more people to talk to, it’s harder to divide the tasks up evenly and you can spend time doing that, as well as more to actually set up in the first place.

Going it alone means you already mentally prepared to handle everything by yourself, and you’re equipped to do just that. 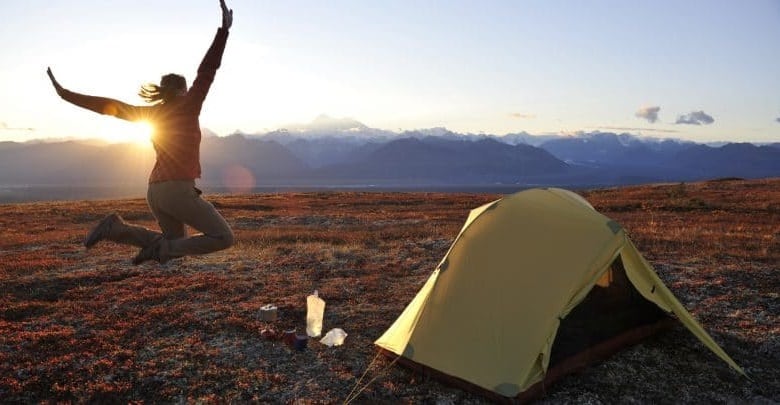 One of the best things we can do for our bodies is go hiking or camping once in a while.

Getting in touch with nature has actually been proven to provide mental health benefits, and there’s constant physical engagement with your surroundings and gear as well.

It’s true that it’s more likely for a woman to tear-up when she’s camping than a man, but there’s nothing wrong with that.

Women are better at accepting their emotions as they come, whereas men will get quiet and find tasks to bide their time instead.

You’re both operating at the same capacity and showing the same capabilities, there’s just one person who is showing how relieved or excited they are, and another who might be harboring it inside.

Camping Alone as Women Increases Your Chance of Being Attacked

Weak people aren’t the ones strapping 60 lb backpacks to themselves and going solo into the woods like a prehistoric hunter.

As stated before, we’re all built differently, and we’re all capable of different things, and with that understanding in mind, people aren’t usually hunting down campers or hikers to assault.

There’s a shroud of fear around the fact that it’s a secluded, dark place (the forest), but to be transparent here, which do you truly think is more dangerous to go into at night: the woods, or Central Park?

The only fear in the wilderness should be of animals. Stay vigilant, and you will be okay.

The Difference Between Men and Women During Solo Camping 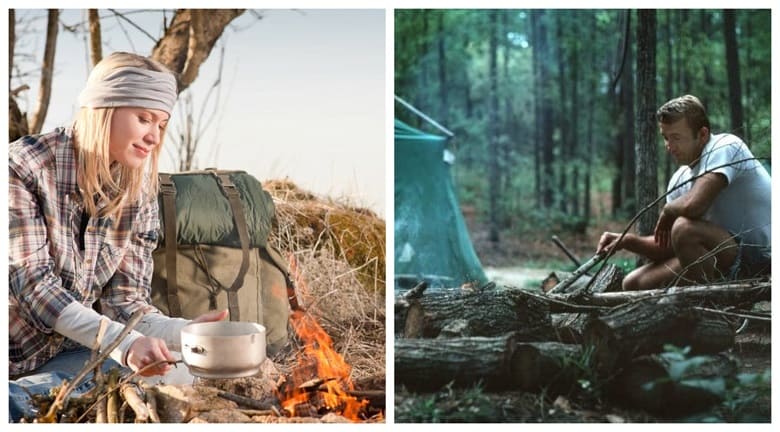 A woman camping alone is no differently abled than a man camping alone: they’re both capable, understanding of what they’re going into, and equipped to handle the mental and physical strain that camping can sometimes have.

There are differences in how we behave on a camping trip or things we do, but not in capability. Some striking differences are:

Men survey their environment and find problems that need solving, while women are more likely to look out for different features that could become a problem later.

Men will solve the immediate issues to prevent future problems without necessarily thinking about what those problems might be, but women will plan our multiple scenarios where things could go wrong in an effort to prevent specific occurrences from happening.

Women are more likely to give detail-oriented expectations and specifications on their gear and equipment before going out on a camping trip.

Men will likely find that the function of their expected items works, and leave it at that.

Women are more likely to seek camping gear that serves multiple purposes, and inspect other spcs such as weight and portability.

Men tend to perform better when reading maps, using GPS equipment, and determining distance versus time (such as if you had to get back to the campsite before dark).

The flip side of the coin here is that women are better able to comprehend written instructions and directions than men.

We all know how visual men can be, and this is just a positive example of what that can do.

The difference here is that it’s easier for men to gain muscle mass than it is for women.

Going back to our previous statements, that doesn’t mean a man necessarily has a guaranteed strength over a woman, it just means that women sometimes have to work twice as hard to achieve similar results in physical fitness, even when camping. 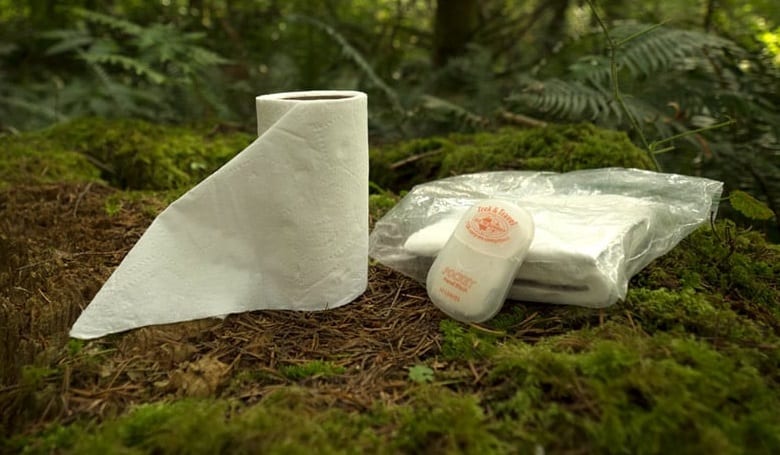 It’s not anybody’s favorite topic, but what would happen if you were to get your menstrual cycle if you were out on the campsite?

There are a few things to keep in mind.

For one, you need to be absolutely certain that your methods of storing menstrual blood will not result in any on your clothes.

Whether that means using a cup instead of a tampon, or using super absorbent pads, you need to make sure that it’s all contained in your preferred method.

Many wildlife creatures are attracted to fresh blood (which is also why it’s not good to bring fresh, uncooked meat on the campsite as well).

Anytime you get a whiff of any odor or scent, those are molecules in the air from the source that have come your way.

Carnivorous animals are attracted to the smell of what they might believe to be fresh or wounded game, and then they’ll stumble upon your campsite.

Whether it’s a single night or an extended camping trip, you’ll need to store excess menstrual blood in a safe manner.

Bring odor-protecting Ziploc bags with you on the trip, and be sure to place your tampons, pads, or cups in them and seal them up well.

From there, they need to stay out of sight, and preferably in the bottom of your backpack to avoid any additional odors from being released.

Apart from personal hygiene products, this is what you’ll need to get started with your very first camping trip.

This is not a minimalist approach, but does attempt to ratify unnecessary items that serve relatively zero functions. 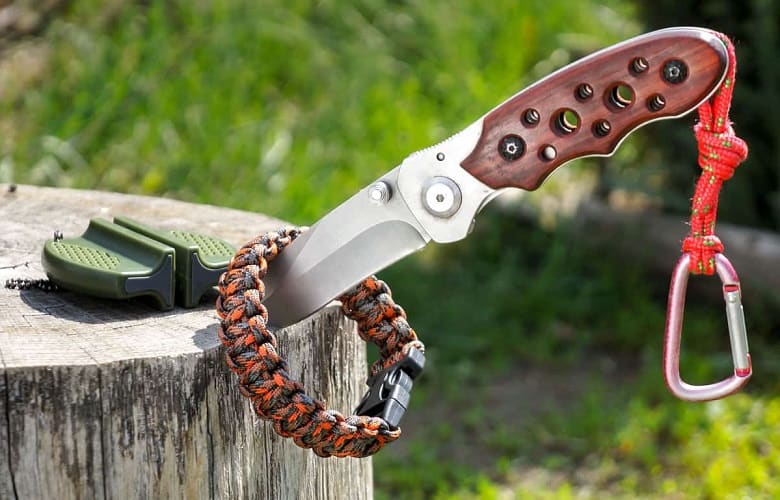 This could be a knife, taser, or a gun (if you have the proper licensing available to you), but you need something for self-defense.

While the scenario of a human attacker approaching you is rare, there are bears and coyotes to worry about, so having something is better than having nothing.

Bear spray will work on other animals as well, and is a non-lethal approach to a self-defense weapon that is specifically geared towards keeping animals at bay.

Find other sprays for specific animals that have a high population in the area that you’ll be camping in.

There are backpacks designed specifically for women that come with a curved contour to the interior, allowing you to feel a relief from back pain.

Women normally have more curvature to their spine than men, so this helps out quite a bit

In the spirit of not adding anything to potential back pain, go for an ultralight tent (3 lbs or under), and you’ll have plenty of additional weight capacity for other essentials. 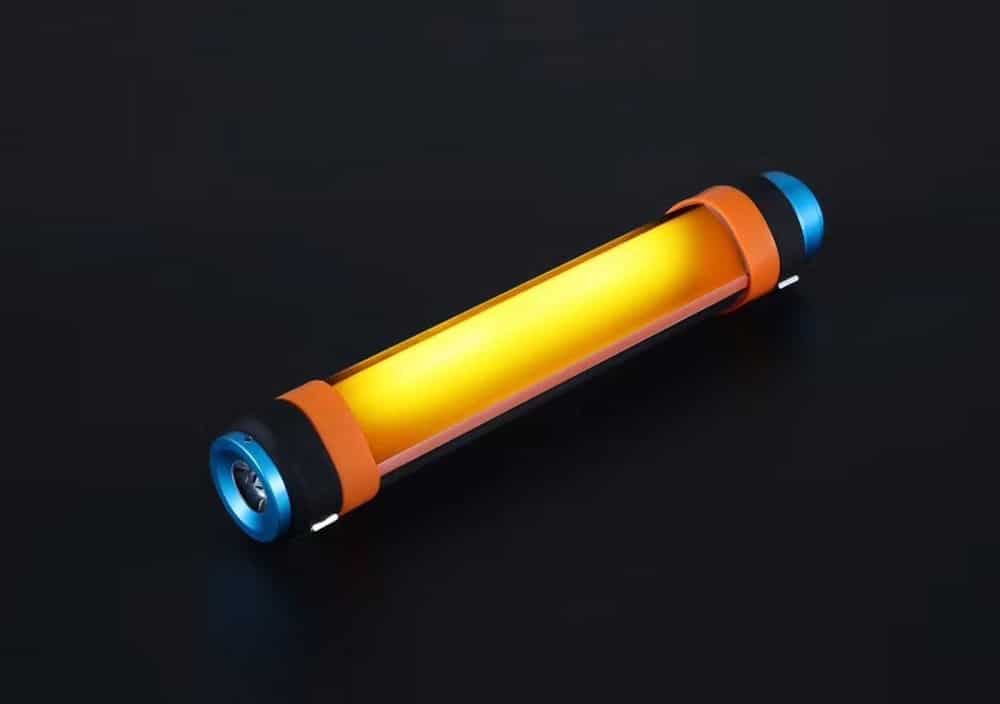 Of all the camping necessities for women, this is perhaps the most required.

Lights that repel mosquitos are great on their own, but pregnant women are likely to attract twice as many mosquitos than anyone else.

Also, mosquitos are attracted to lactic acid, which is excreted from muscles after exercise (hence, the hike to get to your campsite).

There are additional obstacles, but it’s important to embrace them and enjoy your time in the great outdoors regardless of them.

You’ll be better equipped for come-what-may after this little guide, and there’s sure to be nothing standing in your way of mastering the outdoors.